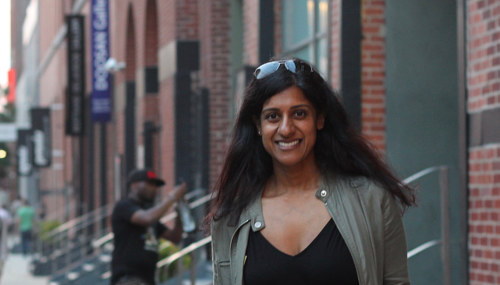 As an artist, I am interested in relationships on the canvas or paper, as one color, line, object or image interacts with another,  also as an entire piece interacts with its surroundings – the frame, the image next to it, the building it is in, the country it is seen in, the person next to it and with the viewer and his or her personal experiences. Nothing exists on its own and as I work I am mindful of these elements and their influence.

My current work involves using vintage Indian textiles to explore and connect with my ancestral heritage. I seek to unite a modern western life and a traditional South Indian life on the canvas with paint and sari fabric, most of which has belonged to and been worn by women in my family.

Radhika Mathews lives and works in Newton, Massachusetts. She can be reached at radhikasmathews(at)mac(dot)com

Current and Past Exhibits

Ornate/Activate was first shown in New York, NY at Shirin Gallery in 2015

Contemporary Indian Art of the Diaspora

Contemporary Indian Art of the Diaspora